China’s crackdown on bitcoin and crypto mining has been a pain point for the market this year. The country which had decided to excise its regions of bitcoin mining operations had caused major FUD which dragged the market down with it. Bitcoin price had staggered following the exodus of miners out of the country known for being the headquarters of mining.

It has taken a while, but the market slowly but surely found its footing again. After being chased out of China, miners had to find new places to set up their operations. Mining logistics proved to be a hurdle for the miners. However, as time went on, other regions of the world opened their doors to these miners in a bid to encourage crypto adoption. The United States in particular took this as an opportunity to make the country the new mining headquarters of the world.

Research shows that the United States has now taken over China as the choice destination for bitcoin mining operations. China had accounted for over 50% of the total BTC hashrate, making it an important region to the digital asset. However, since the crackdown on mining began in May, China has seen its share of the hashrate fall from over 50% down to 0.

In light of China banning crypto and mining, other countries have grabbed the opportunity. Before the crackdown, the U.S. only accounted for 16.8% of the total mining hashrate. Now, the country accounts for 35% of the total hashrate. 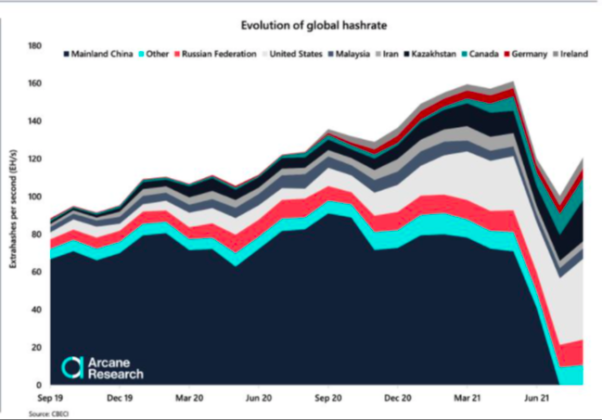 The U.S. has created a positive climate towards bitcoin mining and miners have moved their operations en masse to the region. The market has now successfully separated itself from Chinese FUD, which is known to adversely affect the price of cryptocurrencies. North America now accounts for nearly half of the global hashrate.

Other Countries Jumping In

The United States has not been the only country to jump at the opportunity to domicile more bitcoin miners in the region. Countries like Kazakhstan and Russia have also incentivized miners to move into the region.

The hashrate which had fallen 50% following the China crackdown has recorded a 156% increase since then. After the crackdown went into full effect, the hashrate had fallen to a low of 61 EH/s in July. It has since recovered to 156 EH/s.

It is likely that not all bitcoin miners had moved their operations out of Mainland China. Speculations are that there remains a small number of miners operating secretly in the region. But the hashrate from the region has fallen too low to be relevant to the market.

Is The Planet the Price We Pay For Things of Beauty?