The battle of the billionaires was a bit of a letdown. In “The B Word” conference, Elon Musk repeated the views he’s expressed on Twitter. Jack Dorsey didn’t confront him in any way. The addition of Cathie Wood didn’t bring much to the table in that regard. For something that was initially billed as “THE Talk About Bitcoin,” it was light on the discussion side. It all came and went uneventfully.

At first, we thought it was an event for organizations, institutional players, and investors. However, “The B Word” ended up being free to watch and broadcasted through the Internet. Musk, Dorsey, Wood, and host Steve Lee were in different locations. The teleconference setting provided a relaxed vibe, but at the same time, it decreased the stakes. It could be argued that it made the event less compelling.

The host, Steve Lee, was evidently knowledgable about the subject. He was able to pass the ball around, asked some clever questions, and kept the conversation moving. It seemed like he wasn’t interested in conflict, though. Maybe the three panel members made an agreement beforehand.

If they did, Elon Musk broke it when he asked Jack Dorsey why didn’t he accept Bitcoin from advertisers on Twitter. The implication was that if they’re asking him when is Tesla going to resume accepting Bitcoin, why doesn’t Dorsey do something similar. It was the only adversarial exchange that the panel saw. Dorsey smiled and said nothing.

What Did Cathy Wood Say In “The B Word” Conference?

Ladies first, ARK Investment’s Cathy Wood doubled down on her idea that the USA is in a deflationary environment. She characterized Bitcoin as a hedge against that, as “purchasing power goes up.” It’s also “a hedge against confiscation,” and it can be used “everywhere around the world without friction.” Bitcoin being universal money was a recurrent idea all through the panel.

The biggest idea Wood expressed was how impressed she was with the Bitcoin core developers community. She met them and vouches for their knowledge of economic and monetary history. According to Wood, the core developers could get paid much more anywhere else. However, they are motivated by “a noble goal.” She’s impressed with, “how strong their sense of purpose is.”

When questioned about what is ARK doing to preserve the Bitcoin Ethos, Wood answered with education. They’re spreading the message to the public and to institutions.

When questioned about what she sees in the future, Wood spoke about “The convergence between blockchain technology and artificial intelligence.” She thinks that will, “Change the world in ways we can’t imagine right now.”

What Did Jack Dorsey Say In “The B Word” Conference?

When discussing Bitcoin, Square and Twitter’s CEO is most impressed by “the Network and the community.” The community reminds him of the early Internet, and he’s grateful for everything they thought him.  Bitcoin is “sound money not controlled by the state.”

When Square started to work with money, they “found this crazy predatory system” that traditional finance tends to be. He sees Bitcoin as “A chance to replace the whole foundation.” Our monetary policies and systems need trust.  Bitcoin changes everything. For the first time in history, any person can participate, and it’s not controlled by any network.

Throughout the whole panel, Dorsey didn’t acknowledge Elon’s wild takes. He wasn’t there to discuss, this wasn’t a debate, which was a disappointment. When Musk confronted it with the idea that Twitter could accept Bitcoin from advertisers, he didn’t respond.  Musk pressured him and Dorsey responded that they were working on, “How to create incentives in the network itselfs, and not relly on advertisement.”

The host questioned him about what Square is doing to preserve the Bitcoin Ethos and he had a lot to say. They’re working on decentralization. Square is hiring developers and giving them the liberty to create whatever Bitcoin needs. They’re creating a hardware wallet and other hardware gadgets. Everything they’re doing is and will be open-source, transparent.

He remarked that we shouldn’t see Bitcoin only as an asset that we’re investing in, “It has the potential to make everyone’s life better.” 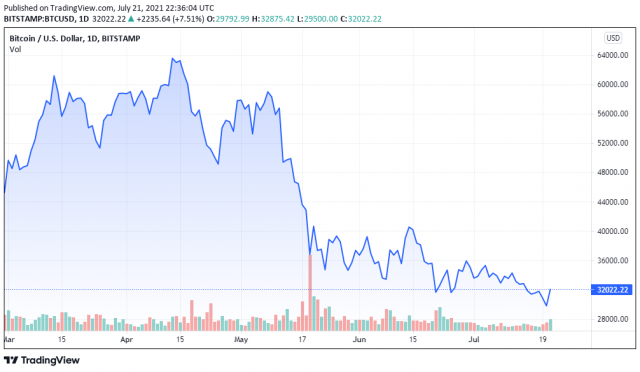 What Did Elon Musk, The DOGEmaster Say?

First of all, he confirmed his diamond hands. “I might pump but I don’t dump,” Musk said. He doesn’t believe in it.

He sees “Money as an information system.” He’s “essentially a supporter” of Bitcoin, but sees Proof-Of-Work as a wasteful system. He disclosed Ethereum holdings and, of course, his position in DOGE. He doubled down on the idea of the most entertaining outcome, that, “The cryptocurrency that started as a joke becomes the reserve currency of the world.” This means, he still hasn’t figured out why scarcity is relevant regarding to money.

He even doubled down on the idea that “there may be some merit ” to faster chains, and that the base layer of a cryptocurrency can do a lot of transactions. The host specifically asked him about the loss on decentralization that this base layer complexity brings, Musk responded that in the future our computers and Internet will be faster, so, “You can make a hedge ledger bigger.”

All in all, Elon Musk hasn’t learned anything about cryptocurrencies in the last few months. He’s the same “noob making all the same noob mistakes” that he was. Unapologetically so, at least.

When questioned about what is Tesla doing to preserve the Bitcoin Ethos, Musk gave a non-answer and changed the subject to DOGE.

Musk loves the DOGE community because it’s irreverent, doesn’t take itself so seriously, and has dogs and memes.

Elon Musk’s SpaceX, With a $33.3B Valuation, Is About to Eclipse Tesla