The whole crypto market is down, but the Dogecoin project is one of the most affected. The community seems to be in shock. Their self-appointed leader is nowhere to be seen. The premier meme-currency has lost 70% of its value since its peak in May. Its market capitalization shredded a whopping $72B in the same period.

Is the Doge Army going to keep holding and buying the steep dip? It seems that way. The price recovered in the last few hours, but the recent red candles are a scary sight.

To be fair, so far Elon Musk hasn’t advised anyone to buy Dogecoin. He did promise to work with the developers to “improve system transaction efficiency.” Did he deliver on that?

And he did say that Tesla was going to accept DOGE, and something about a DOGE-powered space mission. Those can be understood as trolling, but here he seems to promise, or at least hope, that Dogecoin will  “become currency of Earth.” (sic)

Is the Doge Army in the right when they call Musk to help them in their time of need? Is he breaking promises by not even mentioning the cryptocurrency anymore? In fact, Elon hasn’t even mentioned any cryptocurrency project since he was called out by Anonymous. We’re not implying causality, but it’s curious.

Just as we’re not implying causality when we say that Dogecoin’s crash into the ground began during Elon Musk’s appearance on Saturday Night Live.

The Doge Army Asks For Help, Elon Tweets About Rockets

The billionaire is a busy man, there’s no denying that. But, so far, he’s not responded to the Doge community’s cries for help.

Hey, Elon when you tweet Again with this caption THE DOGE FATHER.

I have lost 90% on my doge investment 😪 but still I love doge no matter what.

@elonmusk doge is way down ! Do some work

Falcon landing or falcon taking off its not important anymore man because we have a doge crisis OK , we have no mode to watch or track your falcon anymore seriously

Some people might think he’s not responsible for the sudden dip, and he owes nothing to the Doge Army. However, there’s a case to be made that he does. And we’re not the only ones who think that way. A few weeks back, Cardano’s Charles Hoskinson tried to teach Elon how to fix Dogecoin and at the end of the video said:

“Thank you truly for entering our space. And thank you truly for telling everybody that you’re going to take custody of that cryptocurrency and make sure that it gets where it needs to go. And I look forward to see the great innovations that you guys come out with in a year or two.” 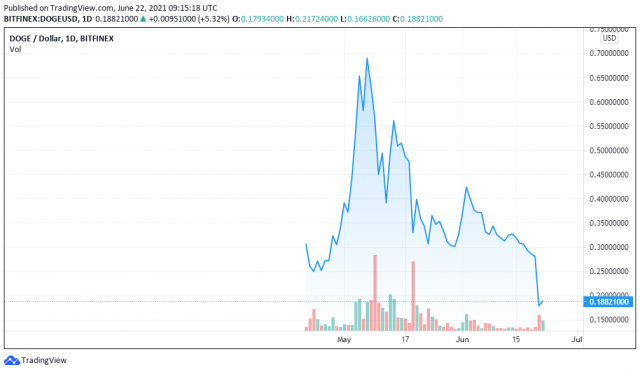 Related Reading | How Bitcoin Could Be Affected By Powell’s Testimony Next Week, Will BTC Crash Again?

While Musk was tweeting about rockets, Billy Markus, one of Dogecoin’s co-founders “bought dogecoin after 8 years of vowing never to buy crypto again.” Was he just buying the dip and making an investment? Or was he trying to help raise the Doge Army’s morale? Maybe a little bit of both? Interesting questions that we can’t answer at the moment.

I bought dogecoin after 8 years of vowing never to buy crypto again, an hour ago.

Back to Elon, this article can’t end without remembering another one of his promises:

Only if Doge can’t do it. Big pain in the neck to create another one.

With DOGE’s crash in mind, is this man thinking about releasing his own coin? He might be.