The jury is still out on whether that meeting between the two gazillionaires and “the leading Bitcoin miners in North America” was positive or nefarious. Part of the Bitcoin community interpreted it as a shrewd PR move and supported the Bitcoin Mining Council. The others smell centralization, are suspicious of closed-door meetings and rejected it. However, what do we really know about the meeting? Not much. So, let’s explore the case further.

It all started with these dual tweets:

Yesterday I was pleased to host a meeting between @elonmusk & the leading Bitcoin miners in North America. The miners have agreed to form the Bitcoin Mining Council to promote energy usage transparency & accelerate sustainability initiatives worldwide. https://t.co/EHgLZ9zvDK

Of course, Bitcoinist was on the case and promptly expanded the information about the Council. The meeting was between MicroStrategy’s Saylor, Tesla’s Musk, and:

“The newly-formed Bitcoin Mining Council is the next logical step in fostering a sectoral shift to renewable energy,” said Peter Wall, chief executive of Argo Blockchain, in a written statement to Forbes

While some Bitcoiners saw this as necessary to fight the environmental FUD reanimated by Elon’s tweet, others focused on the words “Council,” “major,” and “leading.” Are the rich and famous once again trying to take over Bitcoin or is this a genuine movement aimed at taking control of the narrative back?

Saylor And The Bitcoin Mining Council Explain Themselves

This is about promoting energy transparency and improving sustainable mining practices.

Instead of standing by and continuing to write pieces on the topic and hope that this issue goes away, a group of miners came together to say, look we need to be transparent and we should encourage others to be transparent too.

Maybe the word council was too strong.

A few minutes later, Saylor went to battle for them and twisted the knife a little by saying that the Council met “to talk about the energy challenges we face, both real & imagined…”

This weekend, some #Bitcoin miners came together to talk about the energy challenges we face, both real & imagined, and work on solutions together for the good of the entire industry. Details below: https://t.co/fo9fs9ghuy

Imagined by who? Who could be Saylor talking about there?

What do we know about the meeting per se?

The show “First Move” with Julia Chatterley, transmitted CNN, interviewed the CEO of Marathon Digital Holdings. Fred Thiel was present on the call with Musk and Saylor and said its purpose was:

Then, of course, he toed the “transparency” party line:

One of the reasons for the formation of this group is to be transparent about energy use, to educate the marketplace about how bitcoin mining is really an energy consumer of last resort, how we use a lot of energy that otherwise would be wasted. Bitcoin miners don’t consume huge amounts of energy harmful for the environment. A lot are carbon neutral. As we continue to move towards carbon neutrality, we will be an enabler for the industry that provides renewable energy to try new technologies.

He makes a few good points there. Bitcoin tends to go where there’s wasted energy to consume. It’s the perfect incentive for renewable energy companies to innovate and create new clean sources. They will not risk experimentation if there’s not a market for that energy. Bitcoin is that market. 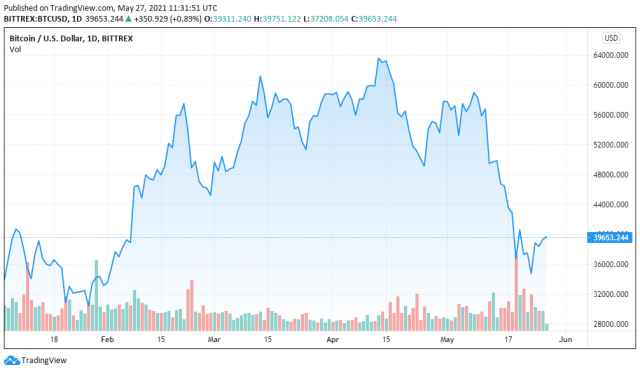 The Bitcoin Community Against Marathon

Precisely Marathon Digital Holdings is one of the companies that the Bitcoin community has a problem with. In the most platinum awarded and discussed comment in the Reddit thread about this whole story, power-user Fiach Dubh accused Marathon of having:

The Bitcoin community fears censorship for those who don’t play by the Council’s standards and smells centralization and miner’s consolidation.

Related Reading | By The Numbers: Here’s How Much MicroStrategy Has Made On Bitcoin

What Did Michael Saylor Say About The Bitcoin Miners Council?

Luckily for CoinDesk, they had Michael Saylor as a speaker in Consensus 2021, their very own conference. Saylor expressed that he wanted to help find a way for Bitcoin to share its complicated but amazing story. About the Council, he said:

The group is more interested in “managing concerns, especially from uninformed parties,” about bitcoin’s energy usage, the CEO said.

And that’s all we know so far about the Bitcoin Miners Council.

White House Moves Towards Intense Crypto Crackdown, What Will it Mean for Investors?