Bitcoin has been guiding the market over the past couple of weeks, providing investors with few insights into its directionality as it oscillates between $10,200 and $11,200.

Yesterday’s sharp upswing that led it up to highs of $10,800 revealed that bulls still have some underlying strength despite their recent weakness.

That being said, the reaction to $10,800 was grim, as bulls rapidly witnessed their control over the crypto dissolve once this level was hit.

One analyst is now noting that where the entire market trends next may depend largely on Bitcoin’s upcoming weekly close. He believes it is vital that the weekly candle closes above $10,600.

At the time of writing, Bitcoin is trading down just over 1% at its current price of $10,630. This is around the price at which it has been trading throughout the past day.

Yesterday, buyers were able to push its price as high as $10,800 before it lost its momentum and began sliding lower. At this point, it does appear to be forming an incredibly tight consolidation range between $10,500 and $10,600.

Where it moves next may depend largely on how it trends heading into the weekend, as a continued bout of consolidation could ultimately result in another bearish decline if bulls are unable to spark another uptrend.

Analyst: Here’s the Key Level BTC Must Close Above to Rally Higher

While speaking about Bitcoin’s near-term outlook, one analyst explained that it is vital bulls close its weekly candle above $10,600 this Sunday evening.

“BTC weekly: Currently retesting $10600 support. As long as that holds until the week ends, that’s typically bullish,” he said while pointing to the chart seen below. 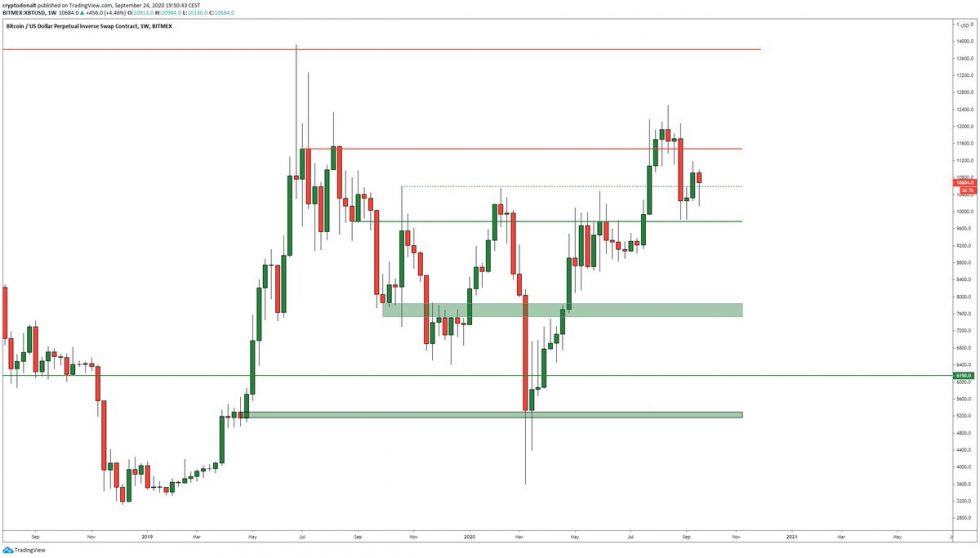 Where the market trends in the coming few days should provide analysts with significant insights into the mid-term outlook of Bitcoin and other major altcoins.

If BTC cannot surmount its mid-term resistance at $11,200 in the near-term, it may continue seeing choppy trading.