Bitcoin is printing a variety of signals that were last seen at the start of historical macro rallies, analysts have said.

The trader says that at the start of the macro bull rallies in 2012/2013 and in 2016, these three technical levels began a steep uptrend that was difficult to reverse:

“BTC Monthly: One measure of a bull market: Price > 26 Hume MA > 9 Simple MA > 21 Exponential MA Twice prior this has signaled a prolonged bull run. Monthly MA’s are like aircraft carriers, i.e., slow to turn. A reversal at this point is unlikely.” 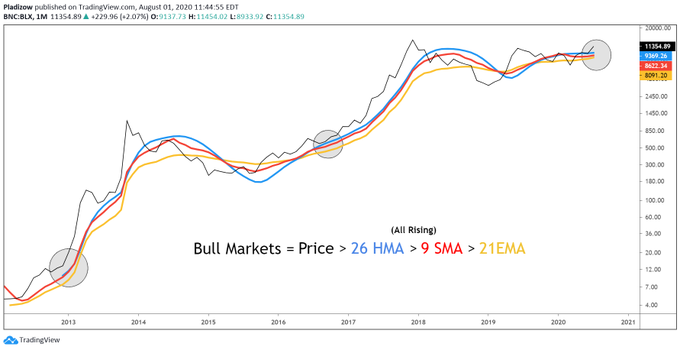 Should history rhyme, Bitcoin is at the start of a longer-term bull trend that will likely last for at least a year. By historical standards, BTC should set a new all-time high an order of magnitude above the last.

Also suggesting Bitcoin is at the start of a long-term bull market is the “Super Trend,” which just flipped green for the first time since early-2019.

Bears Aren’t Convinced of the Breakout

Although the stars seem to be aligning in favor of Bitcoin’s growth, bears aren’t convinced of the ongoing breakout.

Peter Schiff, the chief executive of Euro Pacific Capital, suggested in a tweet published last week that BTC may spend little time above $10,000. He specifically pointed out that BTC’s previous attempts to break $10,000 over the past 12 months failed, resulting in steep retracements.

Here’s what he said:

There also remain certain cryptocurrency traders who are hesitant to admit that Bitcoin has entered a bull trend. They claim that their hesitance to admit so is because Bitcoin has yet to reclaim the $14,000 2019 highs, which shuld unlock more upside.