Bitcoin price became the only topic of interest for markets inside and outside cryptocurrency April 2 after Bitcoin hit $5000 for the first time in 5 months.

Data from major cryptocurrency exchange Bitstamp, which delivers one of the more conservative Bitcoin price feeds, showed a dramatic climb for BTC/USD during the night of April 1.

In a period of just one hour, Bitcoin managed to gain 22 percent, reaching a high of almost exactly $5000 before correcting.

At press time, BTC/USD was hovering around $4700, but volatility remained as commentators attempted to understand the impetus behind the move and its future implications. 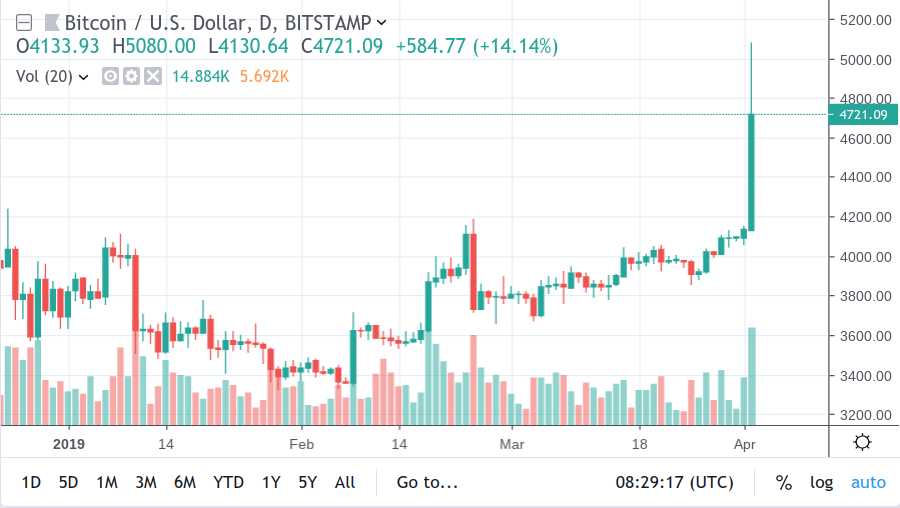 Brief theories from the cryptocurrency industry did not initially highlight a specific factor which caused the Bitcoin price to climb half way back to its pre-November 2018 levels.

At that time, as Bitcoinist reported, it was the knock-on effect of a contentious hard fork in altcoin Bitcoin Cash which sent the price tumbling from around $6500 to a low of $3130 some weeks later.

Bitcoin’s trip to $5k, in line with previous price moves, in turn triggered attention from mass media and mainstream consumers. Data from Google Trends shows a conspicuous increase in the desire for knowledge about both Bitcoin and the Bitcoin price as markets grew.

In a further milestone, Bitcoin’s Lightning Network implementation hit an overall capacity of $5 million for the first time on the back of Monday’s action.

Technical Bounce Or Something More?

“Today’s spike in Bitcoin’s price was caused by more people buying and holding.”

(Media, feel free to quote me in the articles.)

That pattern is meanwhile playing out on trading platform BitMEX, which is seeing liquidations worth hundreds of millions of dollars as Bitcoin bounces downwards as well as upwards.

Others hinted that, temporary or not, the $5000 reversal could signal the start of a new trend. Details were likewise few and far between. The social media personality known as Parabolic Trav, for example, made a rare reappearance on Twitter – a habit which tends only to accompany definitive price changes.

On Monday, Bitcoinist’s own Filb Filb predicted that underlying conditions would facilitate a Bitcoin price breakout in April.

“In summary, the Bitcoin and wider crypto markets are showing all the positive signs one would expect to see of a market that is trying to find a bottom and is doing so consistently,” he wrote, noting that volume depth remained a hurdle to a consistent reversal.

In terms of finding its lows, analysts meanwhile remain split on whether Bitcoin’s record bear market is set to continue longer.

More optimistic last week was Pantera Capital, which identified next year’s Bitcoin block reward halving as a catalyst for price growth. The knock-on effect could hit as soon as this June, it suggested, based on calculations from previous halving events.

What do you think about the Bitcoin price reaching $5000? Let us know in the comments below!

Max Keiser: ‘There Is No Bigger Rat Than Warren Buffett’