Bitcoinist spoke with NEO founder Da Hongfei at NEO DevCon in Seattle, who gave a detailed vision of the road ahead. Blockchain technology is still ahead of its time.

Despite NEO’s evolution mirroring that of the wider Crypto market over the past 12 months, charismatic founder Da Hongfei assures an attentive audience at NEO DevCon that the ‘smart economy’ project remains perfectly fiscally healthy.

Not only do they still have $2 million left from their initial ICO in 2015 (when those things were legal) but they also have millions of dollars worth of BTC, ETH, and NEO.

Live from DevCon, there’s no understating Da’s magnetic charisma. But Layer 2 solutions, platform instability, and scalability are all issues that the Chinese team will have to overcome if it wants to realize its vision of being the number one blockchain by 2020. 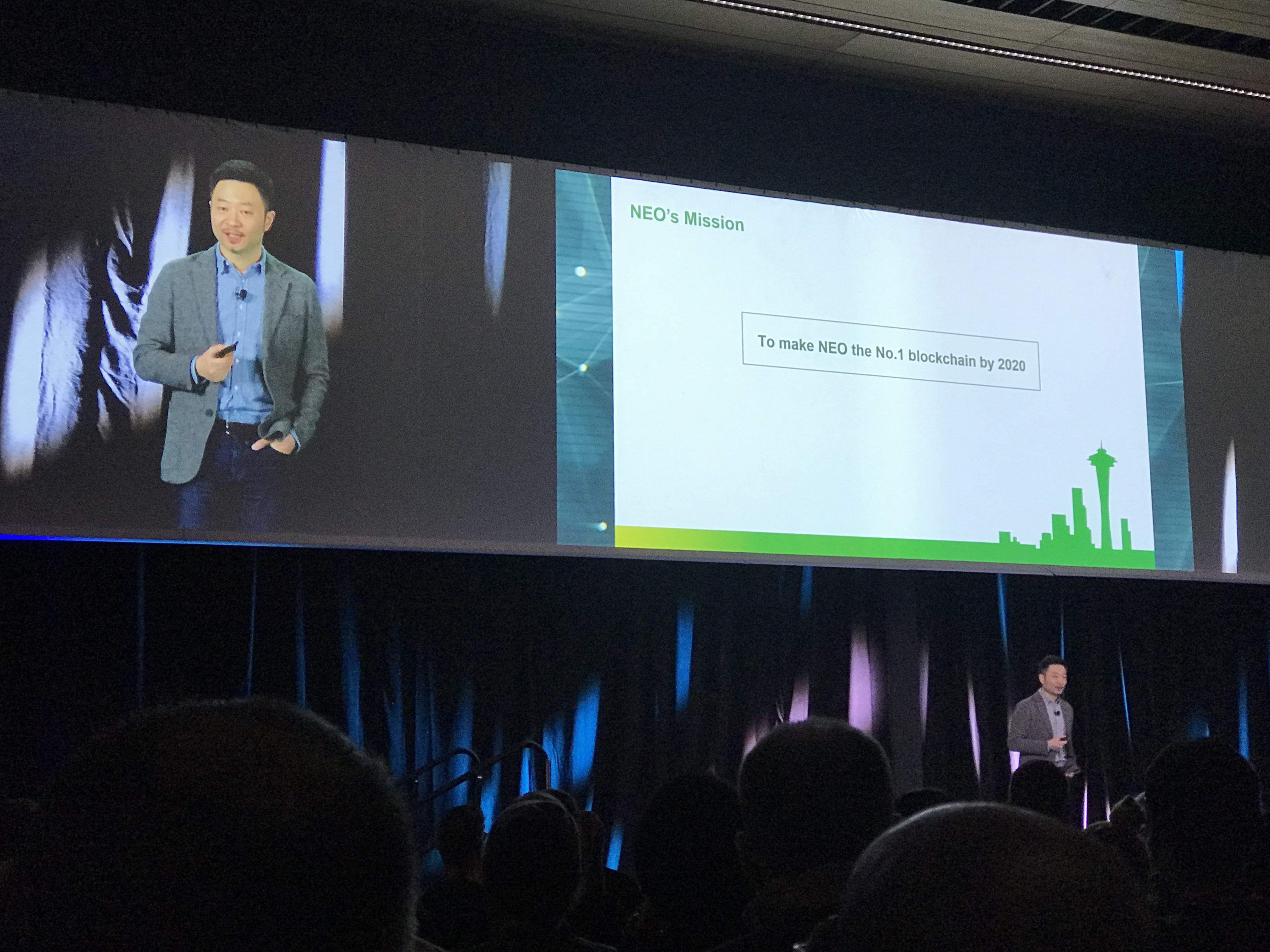 I caught up with Da Hongfei at their developer event in Seattle, where, among other news, they announced that they would be making the Pacific Northwestern city a new NEO home. No coincidence that Seattle also houses the world’s biggest software company or that its leader there is John DeVadoss, ex Microsoft MD.

So even if some more conservative societies the trend is still to give more freedom to individuals, from the tendency of the past few decades China is becoming a more free market economy and that is why we are doing these decentralized distributed solutions.

NEO is an open network for the smart economy. But, where does Da see that happening first? What vertical is primed to adapt the fastest to blockchain tech?

Where Will the Smart Economy Happen?

In fact, of the 100 or so DApps on NEO, by far the most popular are gaming. Yet, their vision of a smart economy is about so much more than geeks with joysticks. But can a smart economy only happen in urban centers, or will the whole world become digital? 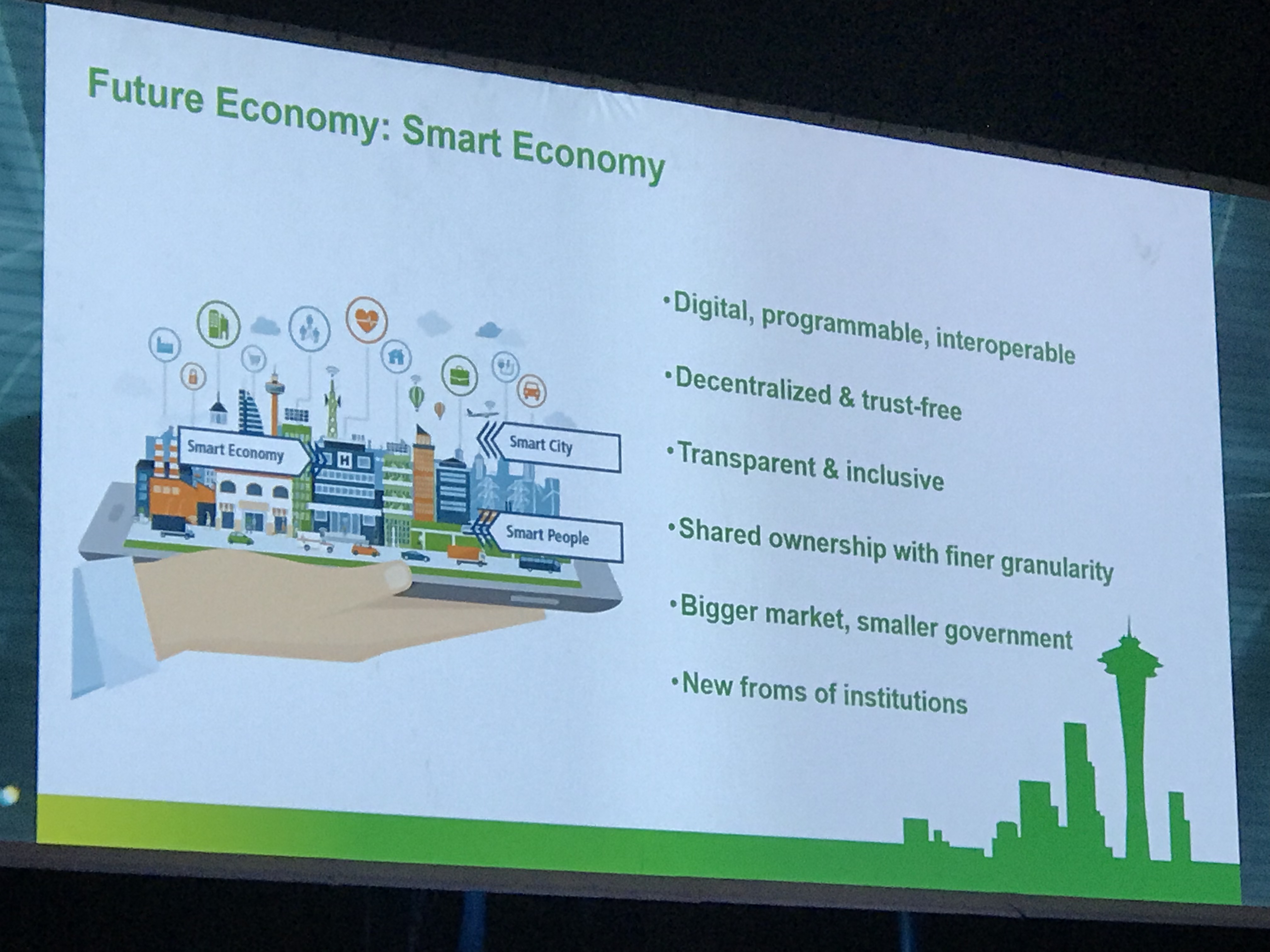 I do believe that eventually, the whole world will become digital, I don’t think it will happen in those rural areas first, although, we can take the payment system as an example.

In China, the credit card is not very popular. Most people don’t own a credit card but because China is developing really fast, we just skipped the credit card and moved to an electronic, mobile payment. We use AliPay and WeChatPay… It is much more convenient.

He goes on to explain that in China, you can pay for pretty much anything anywhere with your mobile phone, from basic toiletries to public transportation. This is still something basically alien in Europe or the USA.

You can even donate to homeless people, they sometimes have a bar code! So, it’s the same for the smart economy, it probably will emerge in some society or area that’s not very good at current infrastructure but are really catching up very fast.

Blockchain is an Institutional Technology

During his speech on stage, Da explained his vision of blockchain technology as being an ‘institutional technology’. Seeing as we usually hear about blockchain being called ‘public’ and ‘peer to peer’, I wanted to know why.

He concedes that he didn’t always see it that way. Back in 2014, there was almost no talk of the word blockchain. All the focus was on Bitcoin and a few other altcoins. Da says:

After 2014, bankers realized that some geeks invented a protocol that could transfer value across countries in a few minutes. So they are curious about the technology and they abstracted it and called it blockchain.

I think only after post-2015 or maybe 2016, people started to think that blockchain could be used to establish a new kind of collaboration between individuals, between different entities. They invented or borrowed words like DAC (decentralized autonomous company) and then Vitalik changed it to DAO. I think after that people gradually realized it could be used to build new institutions. That is when I realized it was a new institutional technology.

Walking back to NEO 3.0 and its ambitious but highly technical upgrades, can Da sum them up into words that give us the overall picture? The changes with NEO 3.0 are essential to make NEO more scalable for large enterprises. But what are the other key takeaways?

We think that blockchain will take a similar route as to how the internet developed. It will be layered into different layers. TCPIP is at the bottom and HTTP protocol is on top of TCPIP.

If you are building an internet application, you don’t have to bother about TCPIP these days, you don’t even need to worry about HTTP. You have different middle layers to build on top of that. So blockchain will take a similar road.

At a basic level, is he talking about programs and applications like WordPress?

Yes, you don’t need to know how to write HTML you just use WordPress. So, for now, all the decentralized apps are built on top of layer one directly on the blockchain. But we believe that in the future, there will be different layers, a lot of layer 2 solutions.

This is one of the reasons we need to change the architecture and also current new designs. On NEO, there are some complicated, global assets which are UTXO-based very similar to the model of Bitcoin. And we also have smart contract assets, so we want to unify the two things. In the future, there will be no more UTXO assets, or global assets, and you have to issue assets with the smart contract.

And this has the effect of streamlining and making everything faster?

Can NEO Really Pull This Off?

Staring at the magnitude of reinventing the entire NEO blockchain and essentially starting from new from a Genesis block, I wonder if Da Honfei is at all worried at the size of the task before him. He smiles slowly nodding his head.

We don’t have a migration plan yet because the features we mentioned at the conference are possible changes. This is because we don’t have the power to decide everything, we propose, and we will look at the community’s response. The core development is not done by Erik (Zhang) alone, a lot of the contribution will come from the community.

Does he ever wonder if he’s in over his head and if it’s worth all the hassle being a pioneer in the space?

Yes, sometimes, leading a blockchain company is not like leading a centralized company. You are not owners, you are not in complete control, sometimes if you are controlling too much, the community will say you are too centralized. We have seven consensus nodes and the NEO foundation controls five of the nodes.

We are slowly in the process of decentralizing the consensus nodes. So yes, it’s like an art, you need to balance between efficiency and decentralization.

I told him that Bitcoinist reported the other day about the utility of ETH DApps. 93% had done zero transaction in 24 hours. He laughs, and I ask what’s it would be like on NEO.

I would say probably similar, maybe better, I don’t have the statistics here with me, but I would say probably better. Ethereum currently has the strongest community of developers, they are like the go-to solution. If you want to study how to do a smart contract, you will probably do it on Ethereum. So those DApps will become like nobody will use.

I think we are not ready. The blockchain infrastructure is not ready for mass adoption, for those decentralized applications, we are a few years away from that, we need to get the layers in first.

Remember all the hype about world-changing solutions and blockchain technology solving all our problems? Well, 2019 is already proving that projects have learned their lessons. The NEO team is still very much focused on what they want to achieve. They just realize that it’s further off than they thought–and it’s an industry-wide issue.

Do you agree with NEO’s founder? Share your thoughts below!

The Dow Crashed on Friday Because Fed Credibility Is ‘Eroding’